Saffron is a species of crocus and belongs to the iris family (Iridaceae). The tuberous plant produces blossoms, each with a three-petaled, yellow-colored pistil, also calles style or stigma, which is world-famous as a spice. Around 150,000-200,000 blossoms or 700,000 pistils are needed for one kilogram of this spice. Saffron is mainly grown in Iran and Afghanistan but also in Europe in the Mediterranean region. The plant only blooms once a year in autumn and can be harvested in a period of two weeks.

Apart from its usage as a spice in dishes, saffron is also used as a dye for clothing. Carotenoids, especially crocin and carotene, are responsible for the strong colour. The intense aroma is produced by essential oils. The monoterpene-aldehyde safranal plays a significant role in that. In addition, saffron contains numerous flavonoids, i.e. phytochemicals. Saffron was already being used in ancient times and Hippocrates already spoke of its positive effects. In China and in India saffron has been known for 2000 years. Modern science continously researches the possitive effects of saffron.

The Rhodiola rosea L. belongs to the family of the thick-leaf plants (Crassulaceae). It is five to 35cm high and has a rose-like smell. Due to its rose-like smell the Swedish botanist Carl von Linné named it Rhodiola rosea. Rhodiola, also called rose root, has been recommended in Eastern Europe, Scandinavia and Asia for stress, exhaustion and overload in daily life for a very long time. In Scandinavia, the Baltic States and Russia, Rhodiola has also been used for nutritional science.

Don't know yet how successful it is to help fertility as only taking it for couple of months, but my gut health improved 100% !!! So plan to carry on taking it 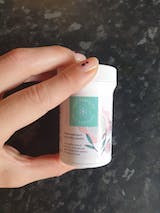 A bottle of this Dr Wolz Zell Oxygen was given to me by a friend when I was very run down and feeling fatigued. I have taken 20-30mls every morning for the past 4 weeks and feel it has helped me to gain my strength back again and helped with the fatigue.
Going to carry on taking this especially now that the autumn/winter is approaching.
Definitely recommend this.